HOME > Chronological Table of History and Development of Uji-cha tea

Chronological Table of History and Development of Uji-cha tea

The development of Japanese tea originates from Ujicha tea and expands widely to the nation, and is leading to the present.

By the late 12th century, “tenshiki” where they pour hot water on “maccha” grown with Ohishita cultivation was introduced from China to Japan. By the mid-14th century, Uji accepted it and start producing tea. By mid-15th century, Ujicha of Kyoto became the top brand of Japan due to the patronage of the Imperial family and Ashikaga Shogun Family. In the early 16th century, “Chanoyu” where they enjoy tea with meal and observation of the tools was started. In the late 16th century, Sennorikyu completed “Wabicha” which is one of the area of “Chanoyu”. “Chanoyu” was loved by warlords such as Nobunaga Oda and “maccha” from Uji was the only tea used in their tea party. Ever since then, Ujicha has been supporting “Chanoyu” with the production of “maccha”
Around this time, Ohishita cultivation where they cover the whole field with reed or straw was started and “Ohishita-chaen”, which was unseen in the world started to appear. Also, abundant amount of rape seed oil, koji, dried sardine, and manure from Kyoto made the soil rich in organic nitrogen fertilizer. From this, unlike “maccha” with strong bitterness with Roji cultivation, “maccha” with bright deep green color and strong flavor unique in Japan was grown with Ohishita cultivation.
After the 17th century, due to the patronage of Tokugawa Shogun family, the system of “Ochatsubodochu” where new tea was delivered from Uji to Edo every year was institutionized. Uji-chashi who produce and sell Uji-cha tea created a blend called Gogumi and made many creations like blending tea for tea ceremony masters in Kyoto.
As a result, in Uji, there are villages that consist of Ohishita-chaen and tea production facilities (tea factories) and townscape that consist of houses of Uji-chashi.

In the mid-17th Encha-ho method, steeming knead tea leaves into hot water to drink its essesce, was passed down from Ingen who opened Manpukuji in Uji. In the 18th century, Uji production method (Aosei Sencha Seiho) , which steam tea leaves are kneaded by hand and dried, was created by tea farmers mainly in Ujitawara Yuyadani and Uji, and “sencha” was started in which the color, scent, and flavor was unique in Japan. This Uji production method was spread all over the country by the producers in Ujitawara and Uji by the end of the 19th century, and it is the basic production method for “Sencha” now.
Also, “sencha” produced in Ujitawara found market mainly in Edo. Therefore, Yuyadani, Ujitawara City has village with tea farmers that produce “sencha” and wholesalers and Gonokuchi in the same town has townscape with the important point of the water traffic and tea wholesalers that deal with“sencha”. 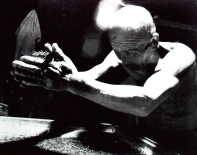 As “sencha” spread, field called “yamanari kaikon” that opened up the field using the slope of the landscape spread the cultivation area of “sencha” using roji cultivation in Ujitawara-cho and Wazuka-cho. Furthermore, by the end of the open port at the end of the Edo period, “sencha”was exported via Yokohama Port and Kobe Port, whichmade contribution to earning foreign currency by taking part in the export industry as exported goods mainly to the American market. Around this time, the mountain area such as Minamiyamashiro Village became a tea production area.

Also, in the early 19th century, the Ohishita cultivation in Uji and Uji production method came together and created “Gyokuro”, which is the best tea production technology in Uji-cha tea. Among the green tea grown in Ohishita cultivation, “maccha” was allowed to be grown only by Uji-chashi (the premier Uji tea makers)Uji tea grower until the late 19th century. Since “Gyokuro” did not have any regulation, Ohishita-chaen spread to areas along Kizugawa River and its riverbed and hills in current Joyo City and Kyotanabe City 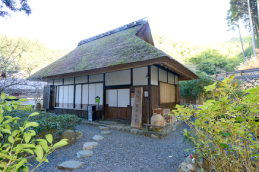 As a result, tea production in Yamashiro area in the south Kyoto spread to hills, slopes, and river bed instead of just staying on the flat ground. Villages were formed based on the fields of Ohishita-chaen, Yamanari kaikon, and Roji-chaen that are good for “maccha”, “sencha”, and “gyokuro” and tea–production-related facilities.

From the 18th century to the 19th century, Bunjincha using “sencha” was popular among writers and artists so “sencha” and “gyokuro” produced in Uji production method was used actively. The blending techniques of tea merchants were developed in order to keep its various flavor and quality consistent.

During Meiji Restoration (1868), “sencha” production area in Yamashiro area in the south Kyoto started to produce more for exportation using the water transport of Kizugawa River. Kamikoma in Kizugawa City had cotton merchants that also worked in tea industry but around this time, they specialized in tea industry doing blending and wholesale.

As a result, Kamikoma has a townscape that is formed with tea wholesalers using the geographic advantage with transportation connection.

After the 20th Century

Although the tea industry had developed, the production such as picking and kneading were all done with hands. On the other hand, the production of tea leaves had increased due to the increase of tea field and improvement of cultivation technology. As a result, mechanization of tea production was inquired. For “maccha”, tea production machine was developed in Uji and for “sencha”, tea production machine that imitates “hand kneading” perfectly was developed in order to prevent mass production of inferior good in the country. Also, machines were developed for picking tea leaves. The mechanization spread to Yamashiro area in the south Kyoto and the area worked hard to maintain the quality. Also, there were technological innovation for related goods such as motorizing the tea grinding motor to crush the tencha into maccha and tea box to store the tea leaves.

Since the mid-20th century, creation of group tea field, joint tea production factory, tea-production-related facilities such as frost prevention facility has been kept up in this area until now for promoting tea industry. Also in this area, they still have Ohishita-chaen that uses reed and straws as well as traditional reed and cheesecloth, and does natural hand picking.

The history of Yamashiro  … Green Text